If problem thinking doesn't lead to problem solving, then it is called problem causing.
~ Starwalker
Posted by Starwalker at 9:56 AM No comments:

The Next Step In Human Evolution?

"What if the “end of the world” started the day it all began? ? Do we even really know for fact that there really was a “beginning?” And if there was no beginning (outside of the creations of the mind), can there even possibly be an end?

If infinity has no beginning and no ending , then “creation” as we know it began when a finite mind forced infinity into a finite box and called it’s contents “reality.” What if it created a story about reality complete with limitations that are only conceptually true, and called it “truth”

What if the “end of the world” was the end of the minds way of making the infinite finite? What if it stopped making the inseparable separate? What if it recognized it’s illusory creations/limitations, and began to create a more unitive, harmonious and sustainable reality?"

Could the next major step in human evolution be achieved by letting go of the finite mind and all of its illusory divisions/separations? Could unity consciousness be the key ingredient to peace, love and harmony on earth?

Posted by Starwalker at 4:59 PM No comments:

Where there is acceptance there is peace.
Posted by Starwalker at 4:50 PM No comments:

Children of The Sun (back by popular demand) 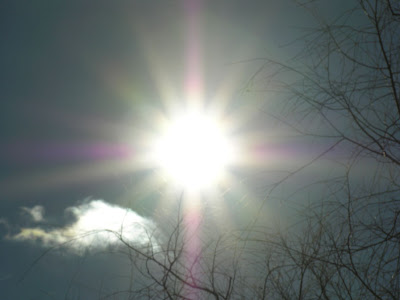 “Several prophetic traditions, including the Inca, foretell of immense changes during our time. As Kathy Doore observes, the Inca prophecies say that now, in this age, when the eagle of the North and the condor of the South fly together, the Earth will awaken. The eagles of the North cannot be free without the condors of the South.

The Aztecs also paid very close attention to the movement of the Sun and their calendar is second only to the Mayan in accuracy. For Aztecs, Tonitiuh was the god of sun and Tollan, the Aztec heaven. Interestingly, the original Mayan name homeland was called Tollan or Tula and it was from Tula where Quetzalcoatl ruled. Mayan prophecy says he’s expected to return in 2012.

If we substitute the Sun for the Son as the transmitter of this energy we can imagine a vibration coming from our star and illuminating the consciousness of the disciples, energizing and empowering them. Christian prophecy says it will be poured out on all flesh in the Last Days (Acts 2:16-21).”

I have always wondered if Jesus was misinterpreted when he said that he was the son of God. Perhaps what he really said was that he was “The Sun of God” meaning that he identified with the divine light that the sun represents and he was a perfected reflection of that divine light.

Toltec mythology describes the sun as the light messenger of creation. Our “dream of the world” is projected to the sun, and when our dream evolves, the sun changes what it projects back to us.

This is a very potent mythology that I personally believe in. By believing/utilizing this myth, anyone can invoke the power of the myth and with this power we can change our lives and our world.

I wrote the following poem a few years ago to express this:

We are the new children of the sun.

We are not here to do what has been done before.

We are here to transform the dream of hell, to a dream of heaven on earth.

We unite as one with the light of the sun, to shine the energy of this dream in all directions.

If we become children of the sun perhaps we can tap into it’s power. Perhaps the increased solar activity leading up to 12/21/2012 is happening for this very reason?

Suddenly this statement in the lord’s prayer popped into my mind: On earth as it is in heaven. To me this says that there is no division between heaven and earth. The only division/separation that exists is in our minds.

“Only in the mind does the inseparable become separate”--Starwalker

What if 12/21/2012 is a calling card of sorts designed to wake us up and pull us out of this “Dream of Separation” and open us up to the power of “The Dream of Unity”?

We are powerful creators even while enmeshed in the dream of separation. Imagine how powerful we can be in a dream of unity!

The old dream of separation said “ Our father who art in heaven” Doesn’t this separate us from God by placing him in a heaven that is separate from earth? I think this takes our power away and places it into hands that “know not what they do”.

“ God creates the reality of the human through the human”--Starwalker

However, in a dream of unity one tends to create win-win scenarios and one is very aware of how their creations/actions affect others. Let’s do it! Let’s take our power back and initiate a dream of unity right here, and right now, by adjusting the Lord’s Prayer in a unitive way:

Our Power, that is of heaven, hallowed be thy ways.

Our kingdom comes, and it shall be done, on earth as it is in heaven.

Reality " Out Of The Box"

Posted by Starwalker at 2:45 PM No comments:

My Journey to Personal Freedom (Part 1)

Over the years I have studied Toltec Authors that wrote about topics similar to Carlos Castaneda. One day around the mid to late 90’s I saw don Miguel Ruiz on the Oprah Winfrey show. He was talking about the Toltec’s but he did not say anything that I was familiar with. My first reaction was: “Who does this guy think he is? It doesn’t sound to me like he knows anything about Castaneda or don Juan, or the path of power!”

Many times after that I would find his book The Four Agreements while browsing at a book store. I would pick it up and skim through it and have the same reaction each time: “What the hell is this? There is nothing in this for me” – or so I thought at the time.

In December of 2002 I had a very vivid and powerful dream. In it I was walking through a Native American camp and I was consumed with the feeling that I really did not know who I was or what it was like to have the complete freedom to be myself. As I walked around the camp, I kept my eyes open hoping to find a medicine person/man of knowledge. I was sure that if I found one there that he could help me. I saw a few people who had that special glint in their eyes, but for some reason I did not feel like approaching them.

Later on as I was walking in the camp along a lake shore, I saw a woman dressed in full ceremonial garb. She was holding an eagle feather and while I was walking she was staring over the tip of the eagle feather directly at me. As I continued along the shore, she magically turned on her heels and followed my motion in perfect synchronicity. At one point I felt an immense wave of energy come from her direction. I had never felt anything quite like what was moving through me.

Two days later I was in a bookstore and once again The Four Agreements book stood out to me. When I picked it up, it opened directly to page 95. My eyes went right to a paragraph that said:

The light of infinity is the purest and most powerful essence of creation.

Or sun and every star emanates the light of infinity in all directions penetrating all that is, all at once.

We are all children of the sun, born from the light of this brilliant, magnificent, and infinite source.

We were all born into this finite physical form so that we may discover new ways to experience and express the infinite nature of the source of all creation.

We are all sparks of infinity with the potential to shine this infinite light with as much luminescence as our physical forms and beliefs will allow.

We are all here to activate the spark of infinity that may lie dormant within ourselves and our fellow man.

We allow the spark of infinity to ignite the fire of our divinity so that our eternal essence can unite as one.
Posted by Jeff at 11:02 AM 1 comment:

The Secret of Mind Over Matter Revealed!!

If you don't mind, then it don't matter!

One day I was thinking about what freedom is and how best to define it. I realized that much can be said about freedom and the pursuit of it. The subject could fill volumes of books, so I contemplated how to define it in as few words as possible. It did not seem possible until it occurred to me that it is simply this:

Freedom: The ability to enjoy life as it is.
Posted by Jeff at 2:32 PM No comments:

" Don't be afraid...You're only dreaming"

-- Dan Auerbach
Posted by Starwalker at 11:32 AM No comments:

Posted by Starwalker at 9:35 AM No comments:

Perhaps calling it "Reality" is our first mistake?

“We clothe the unspeakable with words that have limitations, and then force infinity into a finite box and call it’s contents reality. “

~~Starwalker.
Posted by Starwalker at 9:28 AM 2 comments:

To change the attitude...

When a challenge comes your way.

Welcome it, be thankful for it this day.


Posted by Starwalker at 6:24 AM No comments: